When I posted a link to my latest blog piece, Traffic is unusually heavy right now. You may want to disable “Frequent Locations” to my Facebook page, a fantastically hilarious comment stream ensued. (Don’t worry, I got Ms. Melissa Trent’s consent before posting this).

Best line of all of it, courtesy of Melissa:

“The thing is, I’m not happy with this mid-level of personalization. Either get out of my life or get way better at it.”

I pretty much died laughing. 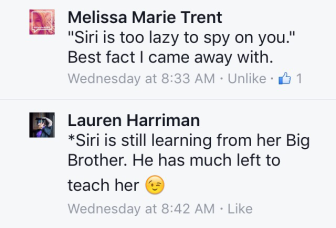 How to Notice Melissa Takes The M Train
The easy one of course is at least noticing that, on the regular, Melissa takes public transit. Her Frequent Locations already show that she’s going to the M train everyday around the same time. Though Next Destination is smart enough to work off of the “Next” Frequent Location, and gives traffic estimates based off of your location at the time of the notification, Siri is perfectly capable of noticing that, when Melissa is at her home (aka, another Frequent location), another set of data always corresponds to the path between Melissa’s home & her work: The M train.

Even if she uses a different stop everyday, it seems like Frequent Locations would at least notice that she weirdly walks out of her way, to a place known to be an M train stop (Apple Maps certainly knows where the train stops are), and then follows the same course the M train is known to follow, ultimately walking distance from a place Siri has already deemed to be one of Melissa’s Frequent Locations. Arguably Siri might have some trouble if the M train perfectly follows the route a car would take, but I bet Siri is secretly smart enough to notice that Melissa’s velocity suddenly matches the transit estimates 😉

How To Give Melissa “Traffic” Notifications About The M Train
Once Siri has her epiphany, applying the data is pretty easy. The notification center already shows “nearby transit”, so clearly Siri knows that information already. So if she’d get off her butt, she’d say “Hey instead of telling you that it will take you 15 minutes to get to work because Main St. is unusually heavy right now, I finally noticed that you take the M train, and the M train is coming in 3, 5, and 7 minutes.”

How To Truly Give Melissa Relevant “Traffic” Notifications
Now, in an ideal universe, Siri would take this all up another notch and notice how long your typical walk to your transit stop is, and would give you notifications with that walking time in mind (if it takes you 10 minutes to walk, Siri shouldn’t give you any estimates shorter than 10 minutes out). And, really, this should all just be a setting option. I know iPhone is somewhat anti-personalization (no matter what you say, it’s got its limitations), Apple Maps lets you pick whether you’re driving/walking/biking/public-transiting. And Apple Calendar lets you choose “driving” or “walking” from your starting destination to calculate travel time to your event. It seems like Siri could just politely ask how you would like your creepy notifications served (medium rare, please? As in please don’t show them super often……)

How To Give People Who Walk Relevant “Traffic” Notifications
Since Siri already knows how to give general walking directions (see above), Siri can certainly manage incorporating walking directions into Next Destination in order to give “walking” notifications on a whole. Even if there was no notion of “walking traffic” (unless you work in downtown Manhattan, perhaps), Siri could at least automatically switch to provide walking estimate times when your current location is less than a mile away from your Next Destination.

How To Get Way Better At It

“You should leave for work now. No seriously, your hair looks fine. Put down the brush and leave.”

Siri knows that when you’re within a certain range of that Next Destination, you drive/walk/take public transit/sky dive. She knows when you were asleep, she knows when you woke up, and she knows what time you left one Frequent Location for your Next Destination.
Ok maybe she doesn’t know that you jumped out of a plane to get there. But she knows the rest. She does. Accept it. Also accept that she’s too lazy to do you a solid.
Once Siri gets her act together, she could even recommend public transit alternatives or walk times when traffic is “unusually heavy”. That would be cool 🙂

Seriously Siri. You’re Just Being Lazy.
Maybe you hate the environment and want us all to drive. Encouraging us to drive when traffic is unusually heavy is especially evil 😛

I mean, you’ve got all of that data. That we pretty much willingly hand over. At least analyze it properly =D

M: “Siri is too lazy to spy on you.” Best fact I came away with.
L: Siri is still learning from her Big Brother. He has much left to teach her 😉

One thought on “Either get out of my life or get way better at it: iOS Public Transit & Next Destination”