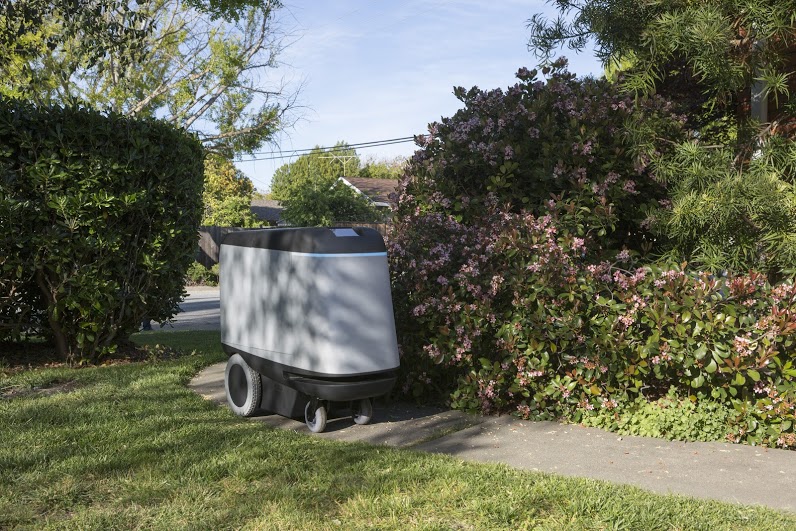 Ensuring that a self-driving vehicle is in compliance with all of the applicable regulations is never a small feat, but Stav Braun and her cofounders at Dispatch designed Carry, a motorized, self-driving, delivery vehicle, for the sidewalk.

As it turns out, such a design results in Carry falling outside of any current motor vehicle regulatory framework, including what was written to apply specifically to self-driving vehicles. The United States Postal Service recently issued a report which did address delivery robots, but the report merely noted that while both delivery drones and autonomous cars face “strict regulatory restrictions”, delivery robots do not. Stav is grateful that regulations that come closest to applying are at the local level, because at least that means that Stav and her cofounders get to “work with the local community and see where their concerns are.”

DMV literally stands for Department of Motorized Vehicles. Every state has one. The DMV has jurisdiction over motorized vehicles and vehicle licensing. Jurisdiction, in this case, means control over. So think of the DMV as the bouncer at a really cool club. The DMV has control over whether any given motorized vehicle can travel on public roads. This means that there is potential for a given vehicle to be able to travel on 49 states’ public roads, but not all 50 states’ roads.

A Ferrari, a commercial truck, a Harley-Davidson motorcycle, a GoPed electric scooter, a Tesla Model S, and Carry are all in line at the club.

The bouncer knows immediately that he has to look at – and most likely will admit into the club –the Ferrari, the truck, and the motorcycle.

Because the motorcycle definition can differ from state to state, the bouncer will start looking more closely here. The CA DMV says “A motorcycle has more than a 150cc engine size, and no more than 3 wheels.” The Massachusetts DMV says that a class M license is for “A motorcycle or any other motor vehicle having a seat or saddle for the rider and designed to travel with no more than three wheels in contact with the ground.” So there is at least commonality as far as the “no more than 3 wheels” element. The Harley-Davidson motorcycle in this case has two wheels. So the bouncer is going to let it into the club.

The bouncer is also trained to be on the lookout for electric scooters, but the bouncer might not be as clear as to whether to let the scooter in. For instance, New York provides this list of Motorized devices that cannot be registered in New York which includes “a device with a motor attached and a handlebar for a standing rider. An example of a motorized scooter is the device called the Go-ped®.” Whereas in Washington, D.C., the Go-ped is not necessarily prohibited. A Go-ped likely qualifies as “a motorized propulsion device designed to transport one person”, and, in that case, qualifies as a Personal Mobility Device (“PMD”). By definition, PMDs are not considered motor vehicles and the DMV has no control over them. And, as it turns out, they can even be ridden on sidewalks and bike lanes.

But, like the Ferrari, the commercial truck, and the motorcycle, electric scooters are driven by people.

Now it’s the Tesla Model S’s turn. Well, now things can get complicated because the Tesla Model S has a self-driving feature. There are then times when a Tesla Model S is not being operated by a real, live human being. Once a vehicle is not being manually operated, it turns out that the DMV is no longer the bouncer. According to the National Conference of State Legislatures, “sixteen states introduced legislation related to autonomous vehicles in 2015, up from 12 states in 2014, nine states and D.C. in 2013, and six states in 2012.” In other words, rather than letting the bouncer make the call as to whether the Tesla Model S is safe for public roads, several states have affirmatively decided to make rules specifically addressing self-driving vehicles.

Now it’s Carry’s turn. What’s the bouncer going to say? Does Carry get to join its friends inside the club? Or is it stuck outside in the cold?

Well, Carry is motorized. So that would suggest that the bouncer (the DMV) does, in fact, have the power to regulate Carry.

But, Carry is a self-driving vehicle. There isn’t a human steering Carry like a remote-controlled race car. Carry finds its way to its destinations using artificial intelligence, just like the Tesla Model S.

Making things even more complex, Carry has no intent to transport people.

The Remaining Components of the Sparked Multipart Question:

In California, as of January 1, 2016, California Vehicle Code (CVC) Section 313.5 controls the use of “Electrically Motorized Boards.”  Such a board is defined as:

“Any wheeled device that has a floorboard designed to be stood upon when riding.” Carry is not designed to be ridden. She is designed to bring you your deliveries. So this law does not apply to Carry. However, it’s still worth exploring the rest of the text of the law:

“Has a floorboard . . . that is not greater than 60 inches deep and 18 inches wide.” Carry is about three feet long and tall, and as wide as a person standing. So Carry might satisfy this piece of the definition.

“Has an electric propulsion system averaging less than 1,000 watts, the maximum speed of which, when powered solely by a propulsion system on a paved level surface, is no more than 20 miles per hour. The device may be designed to also be powered by human propulsion.” As it turns out, a hoverboard falls within this definition. Carry falls at least within this piece because Carry travels at walking speeds (up to 4 miles per hour).

Instead of waiting for state legislatures, some cities are being pro-active and writing laws to specifically address self-driving motorized vehicles that do not transport people. For instance, in Washington, D.C., city lawmakers are calling these vehicles “Personal Delivery Devices” and will soon consider a precedent-setting bill, the Personal Delivery Device Act of 2016. That bill would legalize driverless couriers in the nation’s capital.” In Portland, the city might put in sidewalk delivery robot zones.

Alas, San Francisco has no set plans to address any law that would directly cover Carry.

Because Dispatch is committed to working with communities, Stav and her cofounders have been actively reaching out to regulators in an effort to craft regulations that would promote both safety and innovation, and hopefully bring Carry soon to a sidewalk near you.

Reminder: Nothing in this article is intended as legal advice. If you are seeking legal advice, please contact an attorney.

One thought on “Strutting the Streets – No, Wait – Sidewalk: A Review of the Deliverybot Regulations Facing Dispatch”