CES 2016? Yes please! Today marks the third Consumer Electronic Show I’ve had the pleasure of attending. So here’s stuff that really grabbed my attention today (my pictures were pretty bad, so most of these are pulled from the companies’ various websites). Note that there was a very apparent (and as far as I’m concerned, welcome) shift in the wearable market from the fitness trackers of CES 2015 to the healthcare trackers of CES 2016. Unfortunately, wearables still aren’t as fashionable as I’d hoped they’d be by now. Beauty is starting to make some headway though. And there were some cool baby wearables (start ’em young!), but they’re so early on in their introduction to the market that I don’t think they’re going to gain any traction as of yet.

Ili is straight out of Star Trek. I don’t know why they’re not plastered all over the headlines of every news outlet on the planet. My 7+ years of classes in Spanish are now essentially worthless. But… like… in a good way. It’s a wearable translator that doesn’t even need to access the Internet. I didn’t get to try it, but I did get to see it in person, and it’s super light and pretty. The only major downside is that right now you can only get two language at a time (e.g. English <-> Spanish) per device. So if you wanted to travel to three different countries, you’d need three different devices.

I didn’t have this ranked quite as high (despite the sharing of chats, photos, and videos with HIPAA level security) until I visited the website where I learned that it can CONNECT with certain wearables. I have been waiting for someone to create this technology for ages. I got to speak with the inventor, who created the product for the same reason so many of us create anything: she was working at a company where she had to do something in an old school, repetitive way, and thought to herself “there has got to be a better way to do this.”

Legit wireless earbuds. None of that Beats nonesense where you basically still have a croakie.

The firmness of the variowell mattress takes sleep data collected by wearables/sensors to adapt the firmness of the bed to sleep phases to improve your sleep. Finally, I can do something about my sleep data aside from be excited to recognize that I slept deeply for X number of hours (and of course REM, because I insist on using a wearable that track REM sleep – I have no idea whether Variowell can utilize REM data though).

This didn’t rank as high because there’s only an early on prototype available as of now. Their vanguard product is a medication minder that organizes, reminds, and sends alerts, and allows caregivers/family to check up on your usage. Hopefully the ultimate consumer product will be more compact than the prototype, but I’m excited about its potential! (I didn’t get any pictures – sorry!) Update: I found this picture on their website:

This might actually make me follow through with a skin care regimen. Plus it gets custom fit to your face. Check out their Kickstarter campaign. Plus their founders were at CES and were so nice! They filled me in on some of their plans for the future and they were all very exciting.

Apparently this isn’t exactly new, but considering how tiny (ok, 32 GB) my iPhone’s harddrive is, I want one of MiLi‘s flash drives for my iPhone right now. 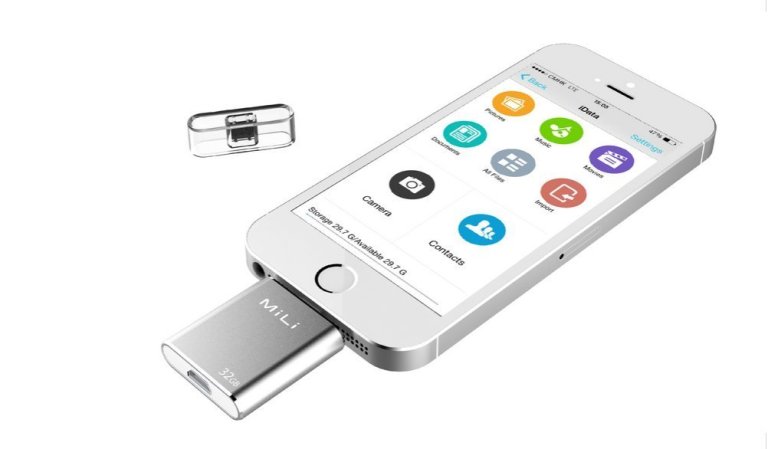 “The first bluetooth phone for kids”

Imagine you transformed your bluetooth earpiece into a kid’s toyphone. That’s this product. I foresee a future where every baby leaves the hospital with one of these.
I ultimately decided I had to at least mention this one. Mostly because the founder was such a nice guy and talked in great length with me about the product and its capabilities. And while they only just started shipments to customers, the product is 5 years in the making and really is a true kid-resistant (okay that sounds like a strange phrase, but kid-proof probably isn’t the right phrase). He dropped it right in front of me, and while there’s parts of the phone that come off, those parts come off on purpose to absorb the shock and easily can be snapped back onto the phone.
But make no mistake – this phone may be kid-resistant, but it’s got an Android Operating system, so it has the potential to do way more than the already awesome things that it does (including Snake(!!!!) and play video files).

I’m not saying I didn’t see I a lot of other really cool stuff – I did. But these were the top products I wanted to share. For more info on what I’m seeing at CES 2016 (tomorrow I’ll be at Tech East!), follow me on Twitter @lmmharriman.

Update: to read about my second day at CES, read CES 2016: Day 2 – Tech East. That piece mentions some of the products showcased at Tech East, but also discusses how that showcasing could have been improved. It also discusses some more really awesome products that I saw when I went back to Tech West.