Rather than focusing on the cool things I saw today (don’t worry, I’ll still mention some), I’m going to give a review of how some of the products were showcased at Tech East. And how that showcasing could have been dramatically improved.

Without any kind of display to show the Basis’s heart rate output, Intel’s goal of showing off the accuracy of the results was lost and people were essentially standing around watching a someone’s legs hanging out of a pod with no idea what was going on.

The short of it is that Intel has an very strange problem: the company has too much cool stuff. And whoever designed their exhibit didn’t seem to know how to properly show it off, so they just sort of put it all on the plush white carpet (it was a really nice carpet), put a lot of blue lighting up, play music, and rock out.

Intel’s stage and other exhibits completely dwarfed. The only reasons I even knew that Health & Wellness products must be at Tech East were 1) someone told me, and 2) the statute (pictured above) told me. I happened to be behind him when I had the opportunity to take the picture. Don’t hate the player, hate the game.

Unfortunately, that meant Basis (hands down the best heart-tracking smart watch on the market) and Fossil (they look like real watches) were buried in with everything else. I’ll give Intel credit for at least trying to show off Basis’s heart-rate tracking accuracy by having people test a “sleep pod” (I don’t know what they actually called it). But without any kind of display to show the Basis’s heart rate output, Intel’s goal of showing off the accuracy of the results was lost and people were essentially standing around watching a someone’s legs hanging out of a pod with no idea what was going on.

Here’s a picture of Fossil’s super basic “jewelry” tracker (it’s not a watch, but it’s pretty):

Yet another victim of Intel’s just-being-too-awesome-ness was this dress:

Panasonic: Mirror, Mirror, On The Wall – why were you hidden in such an obscure place?!

This was literally a mirror. Except it was a magic mirror. Well, there were two. One let you sample various makeup products right there on the mirror. It was incredible. I watched a man do it and seriously, I would’ve believed he was actually trying the makeup on his face if the images on the mirror didn’t lag by the .5 second or so that they lagged (and, of course, I saw his face). The other was a mirror that did an analysis of your face and showed you where your problem spots were. Someone took my picture while I was using it. But that doesn’t mean I need to post a picture of me using it. Ha. Apparently the mirror is concerned that I will be developing wrinkles in the near future. Instead I will subject this poor woman that I caught using the makeup side to Internet fame.

Right now, the mirror on the right suggests skin care products to improve your problem areas, but does not offer the option to purchase “in mirror” if you will. That seems like a given development in the future, but we’ll see whether the developers catch on to that. Their target market is places like Sephora. Sounds good to me – it’s awful to try on make-up in the store. Plus it’s gross.

Samsung did a pretty good job of not hiding their product. they had a whole area devoted to it, with windows and rotating models to get the attention of people passing by.

Back to Tech West

Ultimately, the exhibits at Tech West were just more interesting to me. Plus, this afternoon they had the “Best of CES” exhibit up, so you got to see what the CES officials had decided was worth seeing. And those were properly exhibited (except for the tiny detail that the exhibit was all the way in the back of the floor, with no signs that I saw). Especially this very cool bed (the throw pillows are a nice touch):

SleepNumber’s “It” bed. “To gather the SleepIQ data, the mattress comes with biometric sensors to track your heart rate, breathing, and movement. The It will also work with the enhanced, updated app as well.” Sleep Number wants to deliver you a smart, sensor-filled bed for $1,000 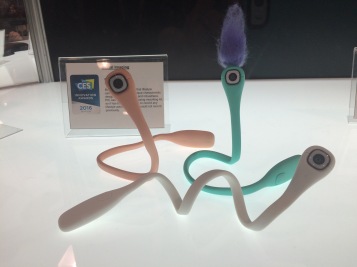 Cameras. really, really creppy cameras. But also undeniably cute. I’ll just get a bundle of them and be Medusa for Halloween, and have a whole bunch of camera feeds. It’ll be great. And I’m sure ridiculously expensive.

The Ghostery booth was cute. I can only imagine that the person inside the suit was super stoked that everyone was taking pictures of him/her. I wonder whether s/he was posing, and if so, what kind of pose.

The exhibitor explained to me that it was just too expensive for them to bring a functioning model to  Las Vegas from Asia. But this thing can recognize shirts versus pants, and fold them. You just toss the clothes in that bottom drawer and they magically appear in those shelves on top (proprietary algorithm, etc, etc). Their video shows that their goal is to have such a system incorporated into standard closet units within the next 5+ years, which sounds perfect. They expect to be selling to the U.S. consumer in 2017, but unfortunately don’t yet have a price point.

Last, But Not Least – Print Electronics! 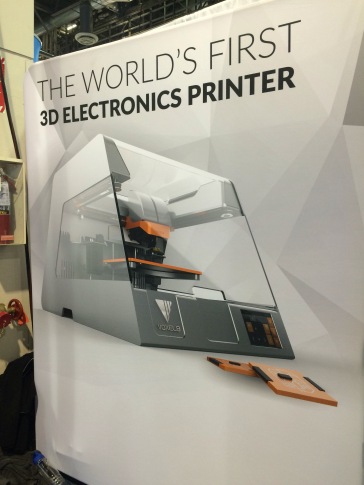 So, this ad is actually a tad misleading, but I’ll let it slide. Really what it does is print the conductive lines that connect the circuitry to peripherals. They showed it with drones – their printable electronics could connect the chip in the center to the propellers on the outer edges.

2 days at CES is all I get, but I had a fantastic time and saw some very cool things. Hopefully I’ll get to incorporate one or more of these products into my work in the future. Hang tight!